Tanah lot is the most famous area and is one of Bali’s symbols of tourism. The temple is located north of Seminyak, around 18 kilometres or 45 minutes drive from Kuta or Seminyak area. Tanah lot is a large complex of tourist attraction with many souvenirs merchants, food stalls, beach and of course, the Tanah Lot temple. The area is always crowded with visitors every day since opening hour until sunset.

The complex have just about everything, large parking space, restaurants, ATMs, all for the comfort of tourists. If you wish to visit here and see the sunset, 5pm is the right time to come here.. 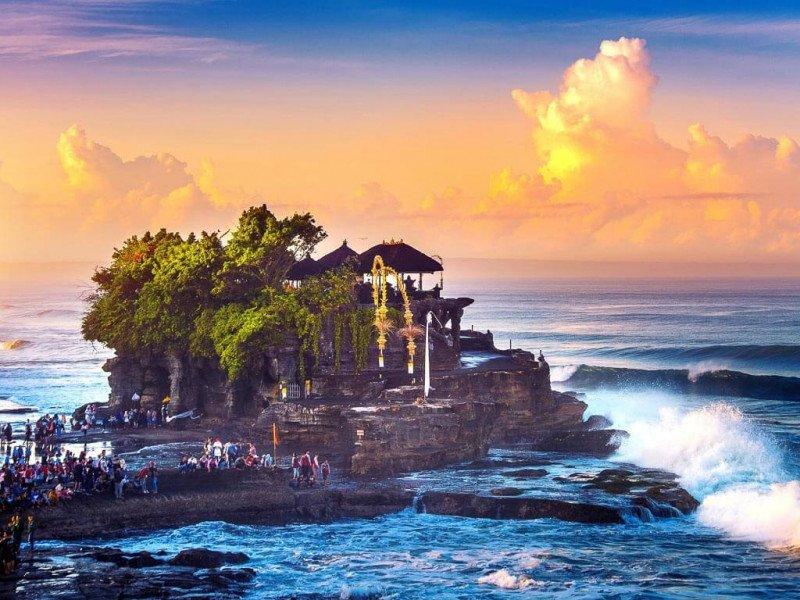 Legend told that Dang Hyang Nirartha moved a coral rock (his meditation spot) to the center of the beach and gave the name Tanah Lot which means Coral rock .

At the base of the rocky island, venomous sea snakes are believed to guard the temple from evil spirits and intruders. The temple is purportedly protected by a giant snake, which was created from Nirartha’s selendang (a type of sash) when he established the island.

Also a Holy Spring is located at the base of the island. It is from the legends in Tanah Lot because supposedly this holy spring comes from the middle of the sea, and it is fresh water, not sea water. Visitors can drink the holy spring or just wash hands and faces that supposedly benefited a lot. One is believed that this holy spring can cure some of the illness that is suffered.

To enter the complex, after entering the main gate, you will be faced with a maze of souvenir merchants, then you will find the main straight road with again, stores on the left and right side.

After quite a long walk, then you will see a large gate and stairs descending towards the beach. from here… enjoy and explore the view 🙂

Kecak Dance is also available in Tanah Lot Tari Kecak. If you would like to see the performace, it is starting at 18:30

Our tour package which has Tanah Lot included in the itinerary is :