Kerta Gosa is a historic building complex in Semarapura, the capitol of Klungkung District. Build in the late 17th century by the Klungkung Kingdom. The Klungkung Palace complex was largely destroyed during the Dutch colonial conquest in 1908. The basic remains of the palace are the court of justice or Kerta Gosa which was used as  court place. The main gate  with the year Saka 1622 (1700 SM) written is also part of the remains.

Kerta Gosa is located in Klungkung District, about 40 kilometres east of Denpasar. .

Semarapura was a city known of it’s art, paintings, dancing and musics.

Bale Kambang and Kertha Gosa have a unique arts on the building ceilings. There are traditional Kamasan Klungkung paintings. Kamasan is region in Klungkung famous with ‘traditional’ styles of painting. The paintings describes the trial cases, and the types of punishment if proven guilty. 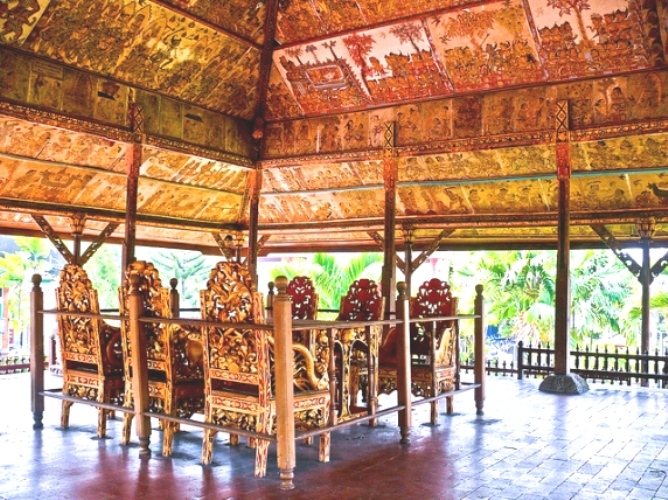 The Wayang paintings also tells a few stories, such as Karma Pahala law. The cause and effect of human’s good or bad deeds during their lives. Another story tells about reincarnation to the world to atone their sin.

The paintings are originally made from cloths, then in the year 1930 all paintings are repainted exactly the same as the original directly to the wooden ceilings.

The last heir, Dewa Agung Jambe and his followers died at the battle against the Dutch colonial conquest. The war known as Puputan Klungkung in April 28th, 1908. After the defeat, the main palace of Semarapura was demolished and became residents. And the remains left are  Kerta Gosa, Bale Kambang,  Taman Gili and Gapura Kraton which until now became a tourist attraction.